Below: Laboratory experiment on carbon dioxide's effect on atmospheric temperature

Note! The sun radiates scalar waves which up to about 2 % wind up to electromagnetic waves, which we on earth measure and study. The scalar waves maintain and provide energy and information to the entire cosmos with everything there. The scalar waves need to be studied and taken into account in all science.
Modern science says that the sun radiates a variety of electromagnetic waves. Some of these are visible light. Other radiation is not visible but can be felt and experienced as heat e.g. infrared radiation (IR radiation). This radiation is experienced as pleasant and makes us gladly stay in the sun (sunshine). The part of the solar radiation that gives rise to sunburn is the UV radiation. It is reduced in the atmosphere through the ozone layer but some pass through it down to earth.

Electromagnetic waves with wave-lengths between 290-400 nm (nanometers) constitute part of the UV radiation. This is reduced by the ozone layer.

Electromagnetic waves with wave-lengths between 400-700 nm constitute visible light. These are represented by the colors of the visible rainbow.

If we take the planet mars as a reference we can say that it almost lacks atmosphere. During daytime, mars has an atmospheric temperature of perhaps 15 oC maximum, while at night time maybe –150 oC. This means that the planet is practically uninhabitable unless one digs and creates entire underground artificial cities. Thus, the earth is the only planet in our solar system that can harbor organic / biological life.

How does the greenhouse effect work?

Our atmosphere has slowly changed since the beginning of time. Initially it consisted of water vapor, sulfuric acid, carbon dioxide, ammonia and other unpleasant gases. The earth was initially uninhabitable. As the geological activity gradually decreased, oxygen began to be produced by the world oceans. Teal algae used the carbon dioxide dissolved in the water and instead created oxygen. The oxygen began to be stored in the oceans and also entered the atmosphere. Today we have an atmosphere consisting of: 21% oxygen, 0.04% carbon dioxide, 78% nitrogen gas and a varying amount of water vapor (1-4%) and certain noble gases, etc.

Water vapor and carbon dioxide actively participate in the greenhouse effect. These substances have the ability to absorb long-wave radiation and later send it on. This means that the long-wave heat radiation is kept close to the earth's surface - let's take an example:

Which, then, are the greenhouse gases?

The greenhouse gases that humans are responsible for are: carbon dioxide, freon, methane, dinitrogene oxide, ozone and certain particles that we release into the atmosphere - dust and similar particles.

Methane gas is naturally formed by the decomposition of organic material. The gas comes from rice crops, emissions from coal mines and livestock management.

Note! Here comes a lab that demonstrates the temperature-reducing effect of carbon dioxide of the atmosphere. The lab can be done in classrooms or at home. 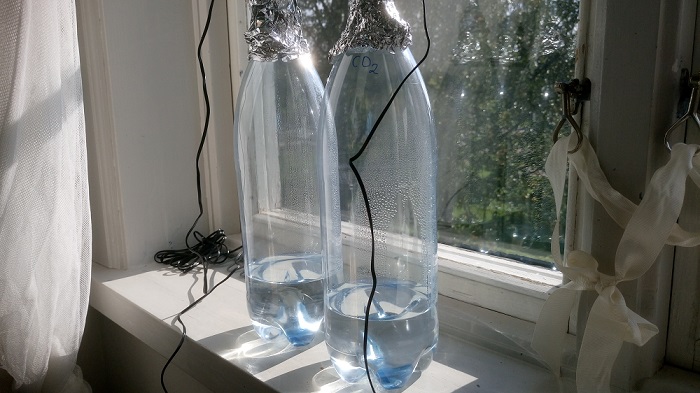 Task: Determine if carbon dioxide has a warming or cooling effect as "greenhouse gas".

Arrangement: The thermometers must be synchronous, i.e. showing the same "temperature" (oC) at the same temperature. They should show 0 oC in ice water and 100 oC in boiling water. If they would deviate a little, then one must find out how they differ from one another.

Remove the labels from the pet bottles. It's easy if the labels are plastic and are loose. Pour water from the pet bottles so that there is about 7 cm of water left in one bottle. Let all the carbonic acid (carbon dioxide solved in water) in this bottle be degassed for a few days. Shake the bottle and have open cap. Make a small hole in the cap so that either a laboratory thermometer (rod thermometer) or digital thermometer can have its sensor about 3 cm down in the bottle. You can melt hole in the cap with a metal awl heated over a candle. Fix the thermometer's sensor with duct tape and don't leave the sensor in contact with the inner wall of the bottle but it should be free. Make sure the cap of the second bottle also gets a hole with the thermometer sensor in the same way as in the first bottle. Fix with duct tape and seal as good as you can. Let the amount of water in the second bottle be equal to that in the first bottle. Leave the carbonic acid in the bottle. Cover the top of the pet bottles equally with aluminum foil so that the sun cannot shine directly on the sensors. Leave both bottles behind window towards the south and wait for sunshine. Make sure the gas pressures in the bottles are the same, i.e. gas must be able to pass out or into the bottles depending on different air pressures - there must be the same pressure conditions in both bottles. This is achieved even if you seal well with duct tape.

Set-up: acc. figure below, and as described in the text under "arrangement". You can execute the experiment in different sunny windows to see possible deviations. 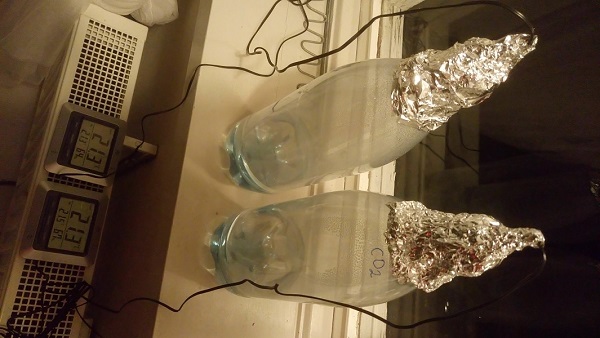 The picture shows the experiment at night at room temperature (the radiator is not on).

Sunlight temperature (pictured below): bottle # 1, which has only atmospheric water vapor above the surface of the water (common air), starts to get a higher temperature compared to bottle # 2, which has extra carbon dioxide in its atmospheric gas. As can be seen in the picture below, the temperatures differ about one degree Celsius.

The picture above shows the sun shining on the pet bottles. Below is the temperature in the two bottles.

As the temperature rises, collisions of gas particles increase. The pressure is the same in both bottles, which means that there are fewer gas particles in bottle 1 (air) compared to bottle 2 (air and extra carbon dioxide). As bottle 2 has a lower temperature, more gas particles are allowed to be present in the atmosphere of the bottle.

An addition of carbon dioxide to the air causes some water vapor to condense into water. This can be seen if two pet bottles like bottle # 1 are set up (regular air in both). Let these bottles be for a while. Then in bottle 2 dissolve a little baking soda in the water and a little acetic acid is then poured in. The chemical reaction that takes place creates carbon dioxide which goes up in the atmosphere of the bottle according to the reaction:

The result is that Carbon Dioxide reduces the Earth's atmospheric current greenhouse effect and temperature.

Here are sources of error for this lab which must be taken into account. This laboratory does not show an absolute scenario for the greenhouse effect for the set up leaves some question marks and the interactions between the incoming gases are also complicated as they all have different properties.

In the reference bottle with ordinary air, the humidity will not increase significantly - which is normal in nature. More water vapor will not be supplied to the air, which means that hardly any extra water vapor can come to the rescue and help store the heat in the bottle's atmosphere.

IR lamp
====================
It is not possible to use an IR lamp because the IR lamp (short and long-wave heat radiation) is not the same as sunlight. The IR lamp heats the CO2 gas directly (not "greenhouse effect") but cannot heat the air in the reference bottle. The sun is very far away.

Absence of water in the bottles
=========================
70% of the earth is covered with water and water is found in soil and atmosphere. As the carbon dioxide content increases, water will condense. A good greenhouse gas (water) will be replaced by a bad greenhouse gas (carbon dioxide). The heat-retaining effect in the atmosphere gets worse and the "system" works to counteract a rise in temperature. In several school experiments, water is missing in the containers and the phase transitions of water are not taken into account.

Bottle Material
============
This material can absorb some type of radiation - here may be a source of error.

Using tap water
=======================
Tap water may contain e.g. chlorine gas or other additives that could affect the result. Chlorine gas has a lower specific heat capacity and could give a  temperature increase. Use mineral water instead.

Other
=====
We will update this lab further. If you have any comments, please enter them below in the comments field or send an email.

The search engine google shows in its search results only bottle labs which, on closer examination, mislead to give a definite view that extra carbon dioxide to the atmosphere raises the atmospheric temperature. In the experiment above, we show the opposite. Use the search engine e.g. Yahoo instead to compare.

What can happen (speculatively) on earth with an atmospheric temperature rise of 1.5-4.5 oC - which is alleged by the political agenda that has been going on since the 1990s?

Here is how it could be in extreme cases:

*  More water vapor will stay in the atmosphere. This in turn makes the atmosphere even warmer as water vapor itself is a greenhouse gas. (If more carbon dioxide were present in the atmosphere, some water vapor would condense, which would even out a temperature increase).
* The water in the world oceans will expand as hot water takes up more space than cold. This expansion is likely to continue for several hundred years before equilibrium has been reached.
* Currents in the oceans can change direction. If the Gulf Stream were to change direction, our temperature in the north would probably drop slightly.
* Climate zones could be moved on Earth.
* As cyclones grow in power over water due to the water's heat content, more of these will be created. They will also become more violent. We can expect huge weather changes and extreme wind speeds, even closer to our latitudes.
* Case 1: Warmer climates will partially melt the North and South Poles' ices, which means that the sea level would come to rise.
* Case 2: The increased amount of water vapor that stays in the atmosphere means that it will rain more. This would lead to more snow on the poles. The water from the oceans of the world would instead be bound up in the polar ices. The water level of the oceans would thus be lowered.